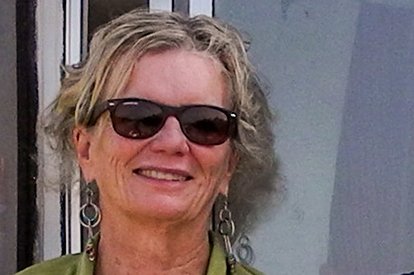 Why do we leave the comforts of our home and friends to travel to unfamiliar surroundings? Is it the lure of adventure, to learn the history or culture of another country….how do we choose? For us, it was a simple photograph of the traffic in Dhaka, Bangladesh…..we have to check this place out! Being intrepid travelers, we love the sense of adventure, but after studying the history of Bangladesh, we found it would offer so much more.

Bangladesh, formerly East Pakistan, is a low lying, densely populated country in South Asia. It has a rich cultural history, with human habitation dating back 20,000 years. Dhaka, the capital, has a population of over 15 million people. With limited time, we decided to visit the tribal areas of Chittagong, Dhaka, the Rocket, the biodiverse Sunderbans, Rajshahi and Rangpur in the north.

After contacting a couple of agencies in Vancouver and finding them ill-equipped to deal with travel in Bangladesh, we searched the web and found Nijhoom Tours in Dhaka. Mr. Hasan was immediately responsive and helpful in planning our trip. We were met at the airport in Dhaka by Hasan and taken to a nearby comfortable hotel. We were briefed about our trip and early the following morning, accompanied by our guide Niaz, we boarded a train to Chittagong. Although the trip was long, rice fields and intermittent villages dominated the scenery; the coaches had a tv, air conditioning, and comfortable seats. Yes, we did see young men riding on the top of train cars. On arrival, we had an interesting ride in motorized rickshaws (CNG) through the city congestion to The Grand Park Hotel.

In the morning, we visited the controversial ship breaking yards and markets selling marine paraphernalia, as well as fresh fruits and vegetables. We were forbidden to take photos of the yards.

In the afternoon, we boarded a bus to Bandarban and The Hillside Resort. The next day, we drove in a 4×4 to the start of our trek. It was very hot and humid for the 2-hour steep hike to the remote village at Boga Lake. All materials must be carried in and out of these villages. Our simple hut was constructed entirely of bamboo and we ate our meals in a small locally-run restaurant. Our village was Christian and a neighboring village Buddhist. We hiked around the lake as the sun was setting.

The next day, after visiting other tribal villages, we retraced our scenic journey, stopping to see the Supreme Bliss Buddhist Pagoda and monastery and then returned via Chittagong to Dhaka.

At dusk, we sailed from Dhaka on The Rocket Steamer. We had a first-class cabin with twin beds and meals; second class passengers spread their blankets on a lower deck and supplied their own food. Our cabin, without a washroom, was comfortable and the meals quite acceptable.

In the morning, we were invited by the captain to visit the wheelhouse and were served tea. On disembarking The Rocket, we drove to the 15th century Muslin city of Bagerhat to visit several ancient mosques including The Sixty Domed Mosque which is a Unesco World Heritage site.

Early the next morning, we left our Mongla Hotel to board the boat for a three-day tour of the Sundarbans. We were accompanied by Hasan, the captain, a guide, three cooks, and three boatmen. Our meals, mainly vegetarian, were tasty and plentiful. The accommodation was sparse but clean and we had our own bathroom!

The Sundarbans, another must-see World Heritage Site, is a huge forested delta containing the largest mangrove forest in the world. It drains the Ganges and Brahmaputra rivers into the Bay of Bengal. At dawn and dusk, we boarded smaller riverboats to explore canals in Konchikhali Forest. We spotted “spotted”deer, and enough birds to make any ornithologist happy. However, always hopeful, we did not see the elusive tiger. We hiked through the forest to Kota beach on the Bay of Bengal. Mudskippers in the intertidal areas were captivating.

On our return trip to Mongla, the riverside activities showed us another way of life in Bangladesh: unloading barges by hand and carrying gravel filled wicker baskets on their heads, dragging nets to collect prawn larvae, brick making, and fodor collection.

That evening, we said goodbye to Hasan and Niaz joined us for our trip north. We traveled again by train to the city of Rajshahi. The following day, we went by small boat to an island “char” in the Ganges. Chars are flood-prone, self-reliant islands. This particular char, with a population of about 100 people living in thatched huts, had one half belonging to Bangladesh and the other to India. There was a guard hut at the border and there was no interaction between the two sides. We were certainly an anomaly as the younger children had never seen white middle-aged people. 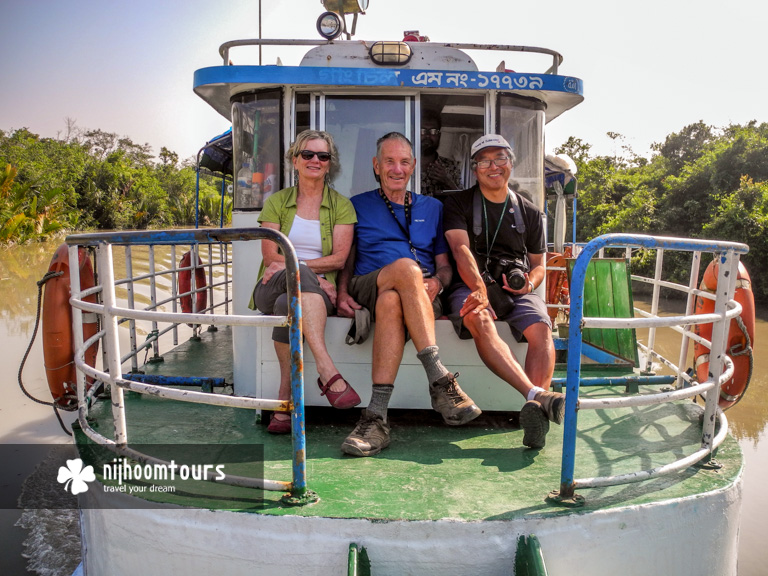 On the houseboat at Sundarbans Mangrove Forest in Bangladesh. ©Photo Credit: Raw Hasan

Traveling north by car the next day, we visited Puthia Estate with its palace and beautiful Hindu temple Govinda. The surface of the temple is covered with carved terra cotta plaques and ornamental towers. 15 km further, we toured several buildings representing the British Colonial period. Unfortunately, they were in stages of deterioration but gave us a glimpse of their onetime splendor. It was a bustling place with many local tourists.

The following day, we visited the outstanding Kantaji Temple, an 18th century Hindu Temple in northwest Bangladesh. It is one of the best-preserved historical accounts in the country. The temple is dedicated to Krishna and each surface is covered with delicately carved terra cotta friezes depicting flora, love, travel, and contemporary life at the time.

In conclusion, travel in Bangladesh can be challenging, but Hasan and his team took great care and we never once felt compromised or fearful. The people were curious but courteous. The cost of our tour was approximately $2,000 US per person for 17 days. We highly recommend this trip.