My brother Steve and I spent a month in Bangladesh in November as guests of Hassan of Nijhoom Tours. Steve is an ancient cities (cultural) tourist and I am a biological tourist. We both had plenty to enjoy.

The highlight for me was the 3 days we spent in the Sunderaban, travelling in a converted fishing boat. Our cook produced excellent meals from his tiny galley. (The very large river prawns, Faissha fish (gold spotted mullet) were especially tasty).

Morning and evening, we explored the waterways in a small sculled boat. Ali, the wildlife guide was very knowledgeable and able to identify all the birds seen. This included all 7 species of kingfisher, the common flame-back with a brilliant red crest and many greater and lesser egrets, black hooded oriole and crested serpent eagle.

There were numerous spotted deer (chital), wild boar and rhesus monkeys. We saw several lots of tiger footprints. We were lucky to see the rare short clawed otter. The most unusual animal was the river dolphin with a distinct neck and long beak filled with teeth.

The hotels were good and meals were very cheap (NZ$5) and mostly good. Fried hilsha fish with wisps of crispy onion should not be missed. These marine fish run up river to spawn every year. Bangladesh has closed 3 weeks of the run to fishing to ensure successful breeding. (I wish the NZ government was as smart with our snapper!!)

The Raas festival was very good, with brilliant costumes and hypnotic dancing. The clue is to closely watch the hand movements-all else provides a framework.

The mosques were generally quite plain. The most interesting one was the Kodla, built by Hindus. The outside was covered with intricate carvings. The giant Buddhist stupa, was also worth a visit.

We spent 2 days with the sand-miners. Freshwater sand is very valuable building material. Divers collect buckets from the river bottom and load these into traditional ironwood boats until the gunnels are 1-2 cm above the water level. There is very little regard for the work of Mr Plimsol in Bangladesh! Small boats to very large boats are loaded with sand to the point of sinking. Other workers collect lumps of coal or pieces of wood from rivers running into Bangladesh from India.

Generally, I had the impression of millions of workers, working very hard for modest incomes.

I am aware that there were some warnings about the security of tourists. We had no problem and were regularly shown that the government was keen to encourage and protect tourists. We had policemen carry our bags into hotels.

I would certainly recommend this country and Nijhoom Tours to intending tourists. 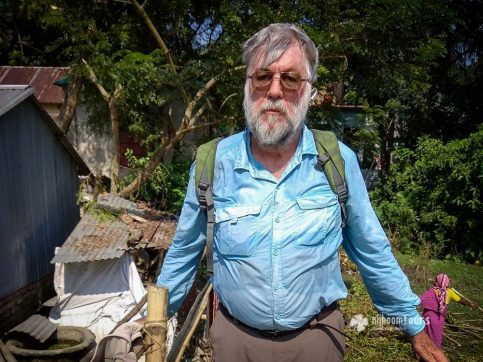 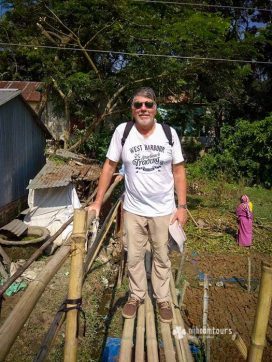