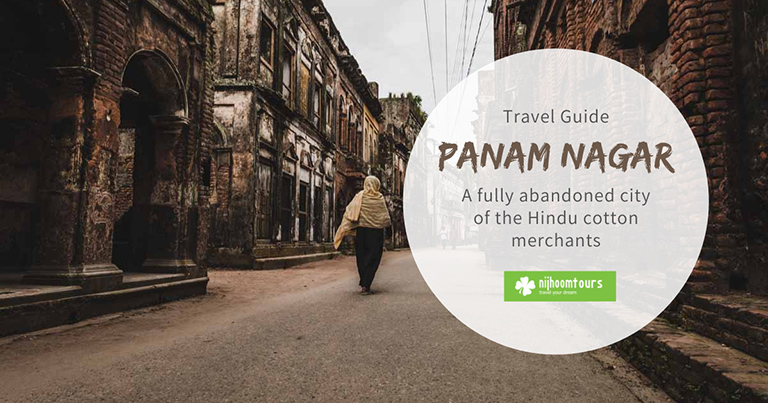 Photo, history, location, how to go, opening hours, off day, ticket price, and many other details of visiting Panam Nagar (Panam City) in Sonargaon, an entirely abandoned city of the wealthy Hindu cotton merchants in Bangladesh from the early 19th-century.

Panam Nagar is a fully abandoned city of the Hindu merchants in Bangladesh built in the early nineteenth century, located about 37 km south of the capital city Dhaka. It is a popular tourist attraction in Bangladesh and one of the highlights of the country – a must-visiting site for travelers visiting Bangladesh.

It is a protected city by the archaeological department of Bangladesh, open six days a week for visitors. It is a popular destination for day tours, which is a two hours drive from Dhaka. You can spend a full day visiting the city, along with Sonargaon Folk-arts and Crafts Museum, Goaldi Mosque, and the other attractions of Sonargaon. 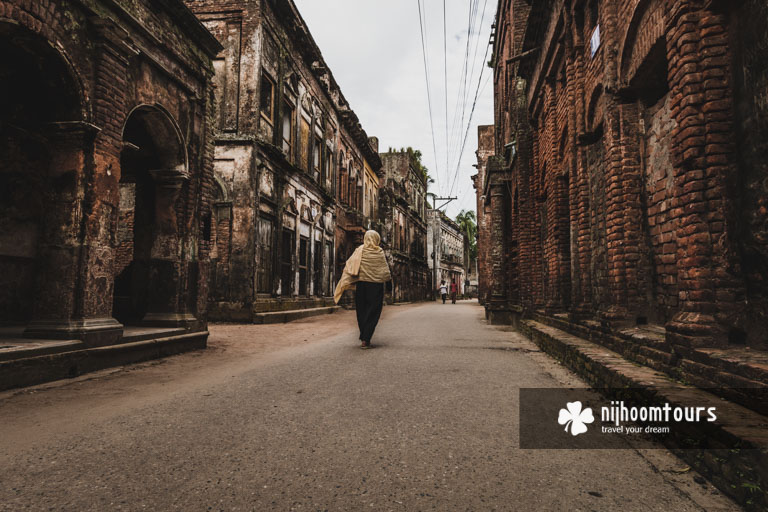 The History of Panam City in Sonargaon

When was Panam Nagar established

Panam, ancient Painam, a locality in Sonargaon, is said to have been the site of the Hindu capital city of Sonargaon emerging in the late thirteenth century. The area formed part of the Muslim metropolis developed on the south of the old city and perhaps constituted the place of residence of the early Muslim governors of the Sultanate of Bengal from 1338.

After the Mughal conquest of Sonargaon in 1610, the Panam area was connected with the ruling metropolis by constructing highways and bridges, which still exist. The existence of these bridges and the canals enclosing the site on three sides is indicative of its being a suburban area of the medieval city.

In the early 19th century, during colonial rule, Sonargaon developed into a trade center in cotton fabrics, mainly English piece goods. It is estimated that there were about 1400 families of Hindu and Muslim weavers in and around Panam. At that time, the British East India Company established its factory in Panam to purchase muslin and other cotton fabrics.

At that time, a group of wealthy Hindu merchants from Kolkata, which was then the capital of colonial India, returned to their ancestral land in Sonargaon and started to build a small township in the area over an older ruined settlement. Thus established the new township of Panam Nagar (Panam City). The existing buildings in Panam Nagar, the Hindu merchants’ residents, were established from the early nineteenth to the early twentieth century. The city continued to flourish until the end of the Second World War. 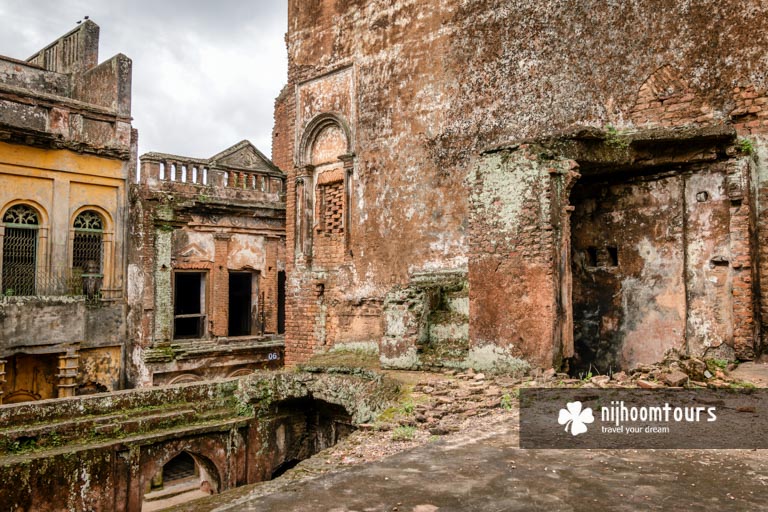 How Panam Nagar was abandoned

Panam Nagar was abandoned after a series of racial riots sparked during the Bengal Divide in 1947. The city was finally deserted after the Hindus migrated to India during the Indo-Pak War of 1965, making it an empty township.

In 2006, World Monument Fund declared Panam Nagar as one of the 100 ruinous historical establishments. 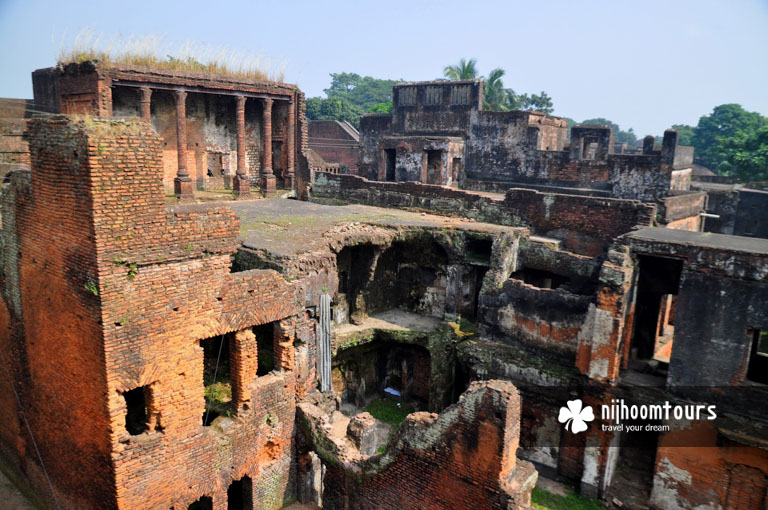 The current state of Panam Nagar

In 2009, fifty-two buildings, and eventually the city, were freed by the Bangladesh govt. from unauthorized occupation. The Department of Archaeology then declared the area a protected heritage site. A new road has been made to bypass the city for the residents around the city, who used Panam Street to access their residence.

Accessing the city by the locals has been limited by making protection fences and gates. Security forces have been deployed to protect the city from vandalism. It is now open to visitors six days a week by paying an entry fee and has become a top-rated attraction to the local tourists, mostly coming from Dhaka. 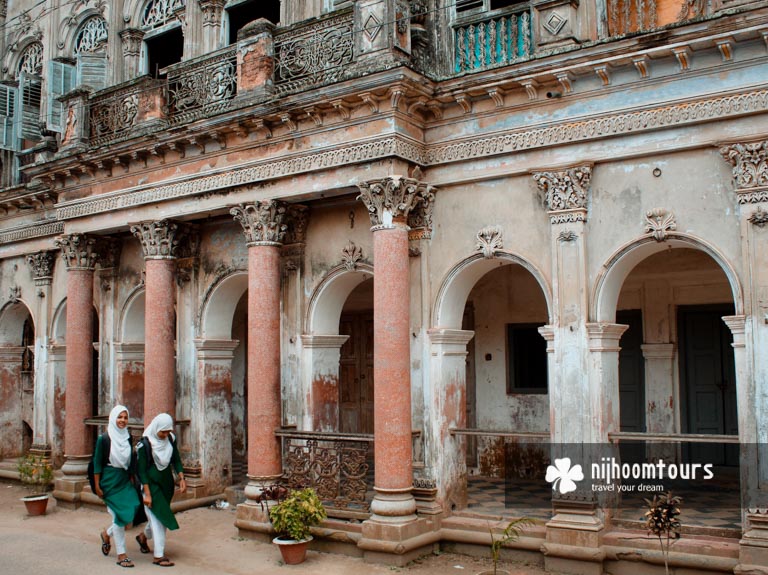 The settings of Panam Nagar

Panam Nagar is densely built on a single street 5 meters wide on average and 600 meters in length. All the buildings have the character of urban street front houses and are lined up on either side of this street. Fifty-two houses in the dilapidated and abandoned condition in the settlement have been identified in the city. Single to three-storied attached and detached houses of varying types and sizes.

In its present state of disuse and dilapidation, one can still feel the vibrant life of Panam Nagar in its prime time. A subtle competition to glorify the houses as an expression of self-image among the owners is apparent. Each owner presented a facade to Panam Street to enrich his house’s visual symphony, where each building kept its own identity blended with the harmonious whole.

The city appears to be well protected by artificial canals all around. Shared use of backyard facilities among the adjoining houses can be observed from the layout of pond, ghat, well, etc. The buildings follow a pattern language by which unity has been achieved, like the use of two or three-story height, symmetry, arched openings, etc. On the other hand, varieties have been achieved in the buildings’ pattern by introducing veranda, balcony, loggia, and porch.

The buildings’ crowning with decorative parapet and projected cornice fascinatingly interlocks the structures with the sky in the backdrop. The decorative treatments of the city’s buildings were transposed from European architecture and blended in places with local motifs. 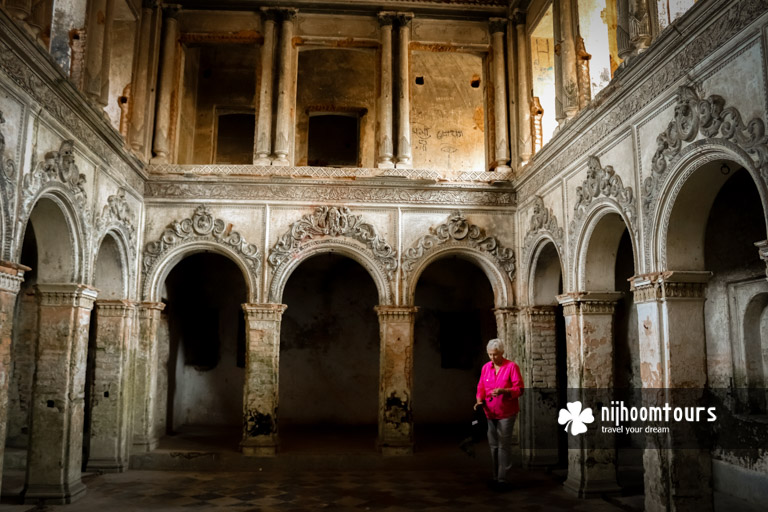 A central hall of a house in Panam Nagar. © Photo Credit: Nijhoom Tours.

The types of buildings in Panam Nagar

The buildings in Panam Nagar can be categorized into four different types:

The central hall is the nerve center of this typology of houses. The halls were highly romanticized with extensive decorations. These are the most expensive part of the house, expressing the wealth and power of the owner. On some buildings of this type, the halls are located on the first floor. (1, 2*, 5*, 16, 26) 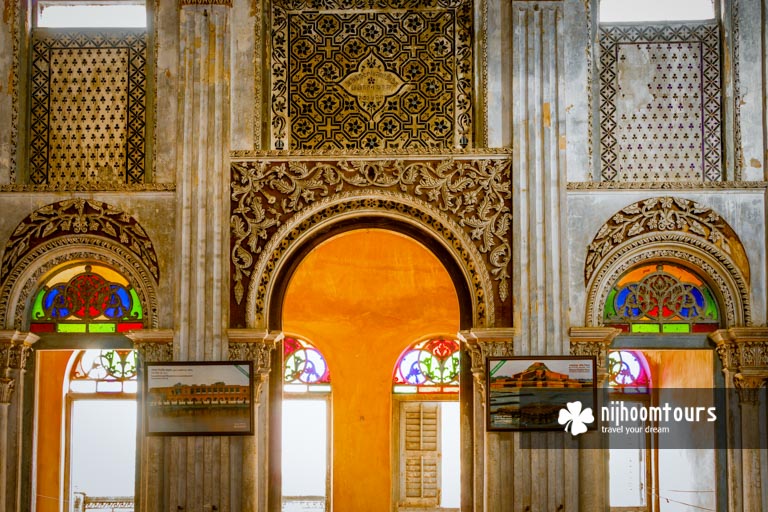 A decorated wall of the central hall at a house in Panam Nagar. © Photo Credit: Raw Hasan.

This is derived from traditional rural house form cantering around a courtyard. The courtyards are essentially enclosed, paved, and open to the sky. The courtyard’s enclosing walls are extensively delineated with arched openings and pilasters having ornamentation in the base, shaft, capital, cornice, and parapet. It appears that almost similar emphasis was given to the design of the street facade and courtyard facades. (36, 40)

The majority of houses in Panam Nagar belong to this type without having any inner court or hall. The consolidated types are designed with either an entrance portal or a veranda or a high plinth as transition space from street to inner house. No uniformity is found in the organization of inner cells and rooms. Formal balance has been maintained in all the front facades unrelated to the inner organization of the houses. Single storied buildings in Panam mostly belong to this typology. 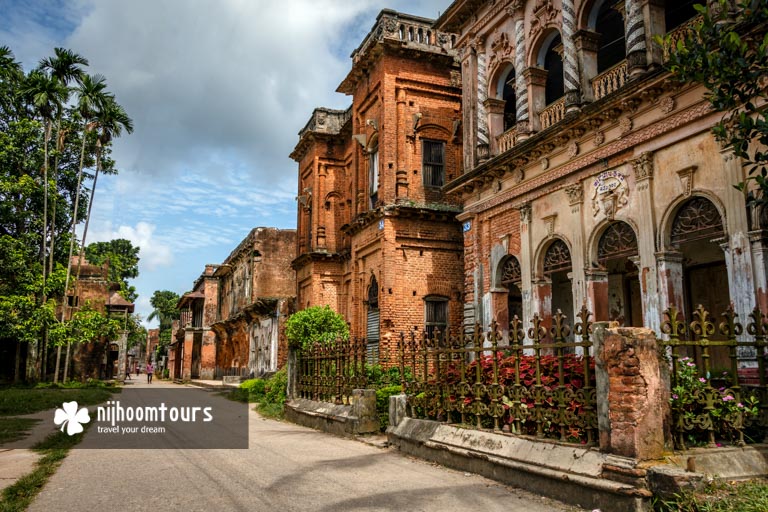 The construction materials of Panam Nagar

Bricks are the main construction material of the city, modeled in different shapes. Bricks are either plastered or left exposed for facade delineation.

The roofs stood on the joist and were made of wood in most cases. I-beam was also used occasionally. The brick vaulted roof usually covered the small rooms. Plaster decoration has been extensively applied in facade design and interior decoration.

Mosaic decoration with broken china, locally known as ‘chinitikri’ work, was trendy in interior decoration. The modest exterior application is also found in some examples. 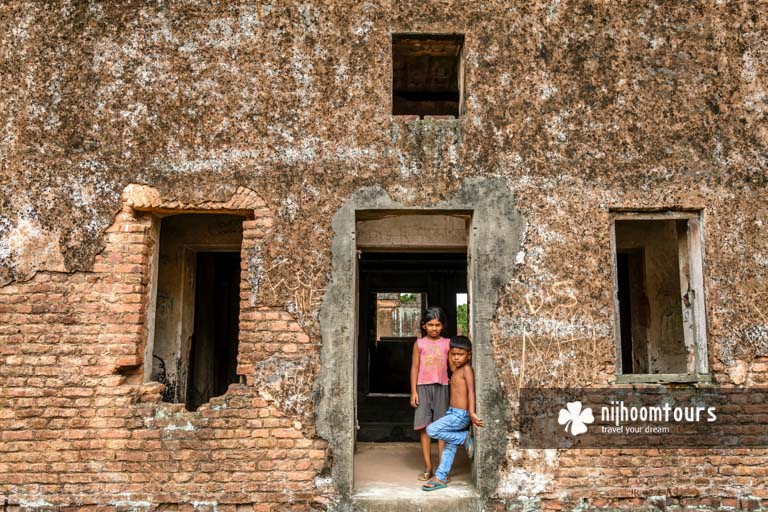 The opening hours of Panam Nagar change twice every year in summer and winter. It opens and closes one hour early during winter. Panam Nagar off day, however, remains the same throughout the year. 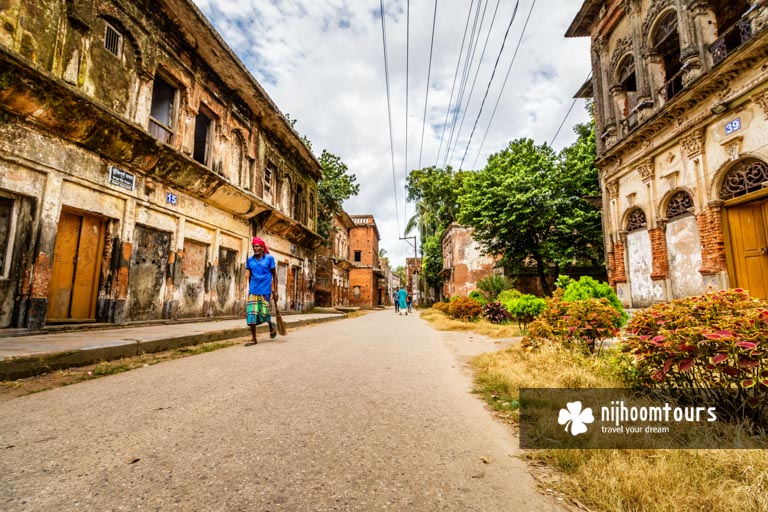 It is possible to reach the city from Dhaka by first coming to Gulistan Bus Station and taking a bus from there to Mograpara, then taking a CNG (tuk-tuk) to the city. There is a direct bus running between Narayanganj and Panam Nagar. 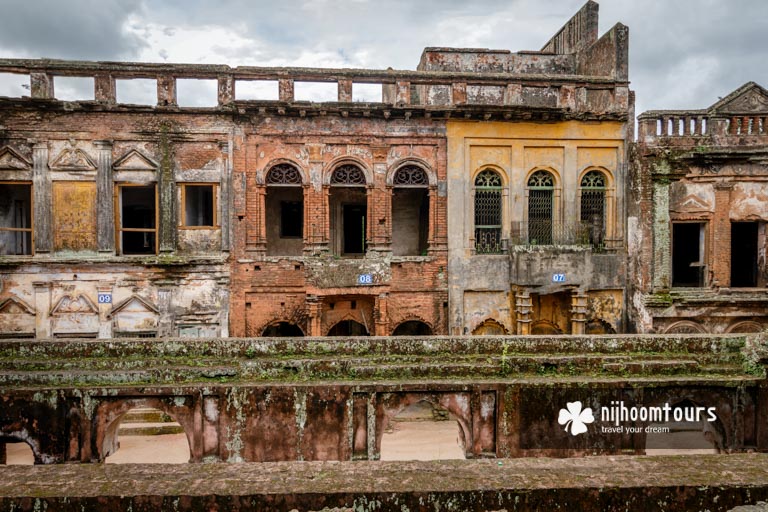 What challenges independent foreign travelers can face traveling to Panam Nagar in Sonargaon?

Currently there is no way to buy tickets online in advance and avoid the queue. You need to go there physically and purchase tickets from the counter.

How can Nijhoom Tours help foreign travelers to travel to Panam Nagar in Sonargaon?

Nijhoom Tours is a specialist local tour operator in Bangladesh organizing tours to Panam Nagar for foreign travelers on a tiny group of 2-5 people only. We run day tours from Dhaka regularly to visit the city and other interesting sights in Sonargaon.

You can book a private Sonargaon & Panam City Tour with us or join with others to reduce cost, and visit the city. Pick-up and drop-off for the tour will be from your hotel conveniently. The full-day tour starts from $70 US per person including all the entrance tickets, lunch, an air-conditioned car, English-speaking guide, driver, a boat ride on river Meghna, and many more.

Have you ever visited Panam Nagar? How fascinating have you found the city? Have I missed something here? Please share your thoughts and experience with us in the comments.