Sonargaon: The tale of a golden village The ancient capital of Sonargaon (or “Golden Village” in Bengali) flourished as the region’s major inland port and center of commerce during the pre-Muslim period. The name Sonargaon came as the Muslim version of the ancient name Suvarnagrama.

Hindu ruler Danujamadhava Dasharathadeva shifted his capital to Suvarnagrama from Bikrampur sometime in the middle of the 13th century. With the Muslim invasion and the arrival of the sultan of Elhi in 1280, it’s importance magnified as the region’s de facto Islamic capital. Some 42 years later, the first independent sultan of East Bengal, Fakhruddin Mubarak Shah, officially established his capital in Sonargaon.

For the next 270 years, Sonargaon, known as the ‘Seat of the Mighty Majesty’, prospered as the capital of East Bengal, and the Muslim rulers minted their money here. By the second quarter of the fourteenth century, Sonargaon developed into a commercial metropolis; seafaring boats could easily reach Sonargaon from west Asian and southeast Asian countries. 14th-century Moroccan traveler, Ibn Batuta, describes Sonargaon as an important port city that had direct commercial relations with countries like China, Indonesia (Java), and the Maldives. Mu Huany, an envoy from the Chinese emperor, visited Sultan Ghiyasuddin Azam Shah’s splendid court here in 1406. He observed that Sonargaon was a walled city with broad streets, great mausoleums, and bazaars where the business of all kinds was transacted. In 1558, famous traveler Ralph Fitch noted that it was an important center for the manufacture and export of Kantha (traditional indigo-dyed muslin), the finest in all of India. Ancient Egyptian mummies were reportedly wrapped in this Kantha exported from Bengal.

When the invading Mughals ousted the Sultans, they regarded Sonargaon’s location along the region’s major river as too exposed to Portuguese and Mogh pirates. So in 1608, they moved the capital to Jahangirnagar (later named ‘Dhaka’), thus initiating Sonargaon’s long decline into oblivion. Yet it’s legendary fame for incredibly fine Muslim fabric continued undiminished until foreign competition from the British (and their import quotas) ruined the trade. 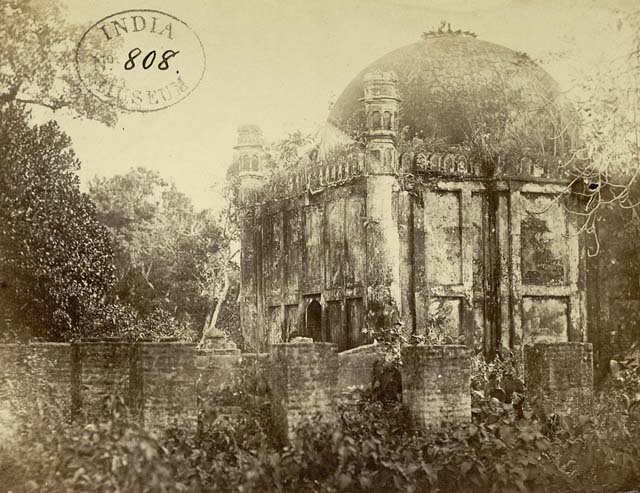 It rose to some eminence in the nineteenth century when Panam-Nagar was established as a trading center in cotton fabrics, chiefly English piece goods. The extant remains of Panam-Nagar represent residential houses built by Hindu merchants following colonial style with inspiration derived from European sources.

The remains of the city of Sonargaon are not found in a well-defined composition. There remains now in Sonargaon that can be ascribed to the Hindu capital city except a deep muddy stagnant canal surrounding the site which appears to have originally been a moat for the protection of the city. The existing remains are a few medieval buildings, mostly religious, and belonging to the Sultanate and Mughal periods, some Mughal bridges, and a few residential buildings of the colonial period in the Panam Nagar. Other remainings are Goaldi Mosque (1519) and Abdul Hamid’s mosque (1433-36), and the tomb of Ghiyasuddin Azam Shah. It is a must-visit site near Dhaka while visiting Bangladesh.

Have you ever visited Sonargaon? How fascinating have you found it? Have I missed something here? Share your thoughts and experience with us in the comments.