10 Most beautiful historical mosques in Bangladesh 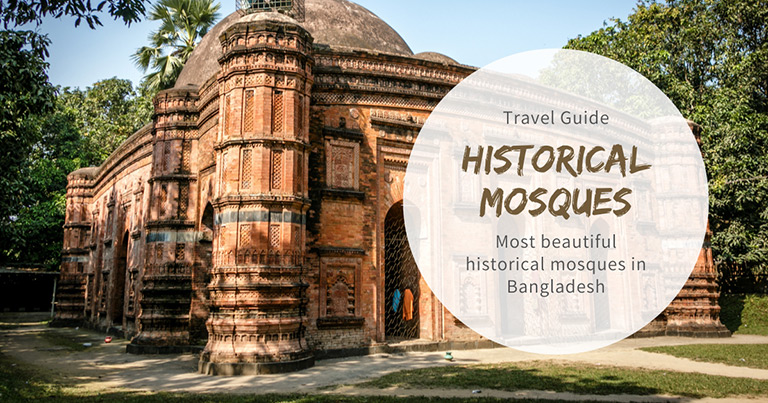 A list of the most beautiful historical mosques in Bangladesh, built during the pre-Mughal and the Mughal rule in Bengal, now preserved by the archaeological department of Bangladesh.

During the Muslim rule in Bengal, many new cities were built and adorned with palaces, forts, monumental gateways, free-standing victory towers, mosques, mausoleum, roads, and bridges, the remainder of which is scattered over all the country. These Muslim rulers specially built many beautiful mosques and dug big water reservoirs for sweet water supply. Here is a list of the 10 most beautiful historical mosques in Bangladesh built during the Muslim rule in Bengal during the medieval period. 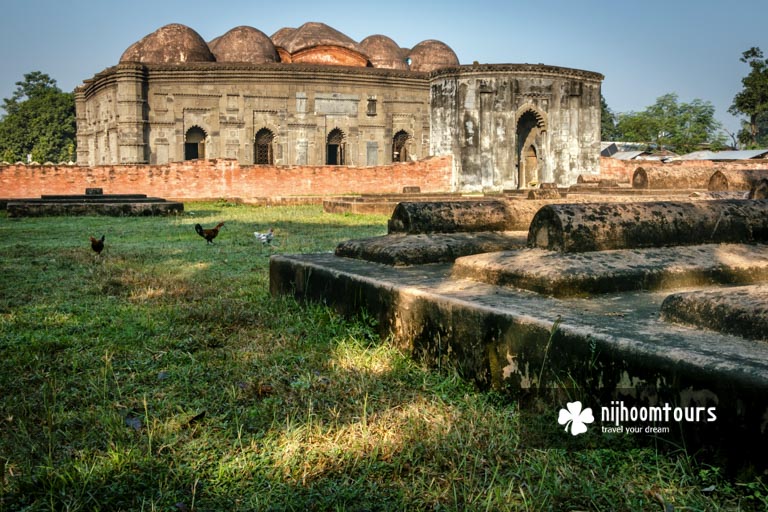 “Chhoto Sona Masjid” or the “Small Golden Mosque” is a remarkably fine specimen of its period, built by a certain Wali Muhammad between 1493 and 1519 on the wealthy Bengal capital Gaur during the reign of Sultan Hussain Shah. It was originally roofed over with fifteen gilded domes including three chau-chala domes in the middle row. It derives its name from the fact that the domes were once gilded.

The chief attraction of this monument is its superb decoration. Carved in shallow relief on both the inner and outer surface of all walls, the ornate stonework seems like a faithful reproduction of the highly developed traditional terracotta art of Bangladesh and it closely resembles the quality found in its wood-carving or filigree work. The floor of the sanctuary was originally covered with beautiful glazed tiles with floral patterns. On the eastern side of the mosque, there is a stone gateway with pointed arches. Chhoto Sona Masjid in Gaur is number one on our list of the best historical mosques in Bangladesh. Built in 1523 by Sultan Nusrat Shah, Bagha Mosque is another beautiful monument of the Hussain Shahi period. It has ten small inverted cup-shaped domes. The mosque is beautifully ornamented with the finest specimens of terracotta art, depicting rich floral patterns, grapes, and rosettes on all wall surfaces, especially on the mihrabs.

The western inner wall face is relieved by three ornate mihrabs in the three southern bays, a paneled design in the fourth, and a small mihrab in the upper story of the fifth. The super terracotta decoration in the central mihrab represents a floral framework around the niche, the spandrels of which are delicately sculptured with a profuse growth of vegetation, interlacing the bold central rosette. Bagha Masjid in Rajshahi is number two on our list of the best historical mosques in Bangladesh.

Kusumba Mosque is the best example of the later Sultanate period mosques in Bengal. It was built in 1558 by a certain Sulaiman during the reign of Sultan Ghiyasuddin Bahadur Shah I. It is a rectangular mosque with six hemispherical domes above. Only six stone mosques built during the early Islamic or Sultanate period exist in greater Bengal. Kusumba Mosque is one of them. Stones used in this mosque are dark black basalt that was transported from Rajmahal hill of Bihar through waterways.

There is a well-designed raised gallery of massive stone pillars on the northwest corner. It is reached by a staircase from the ground level of the prayer room. There are no traces or proofs of any handrailing along with these steps. This is the only surviving example in Bengal of an unscreened internal connecting staircase through the place of the male worshiper, which proves that it was a place for the Sultans or rulers or builders and their immediate entourage, not a ladies gallery which is the popular belief. Kusumba Masjid in Rajshahi is number three on our list of the best historical mosques in Bangladesh. 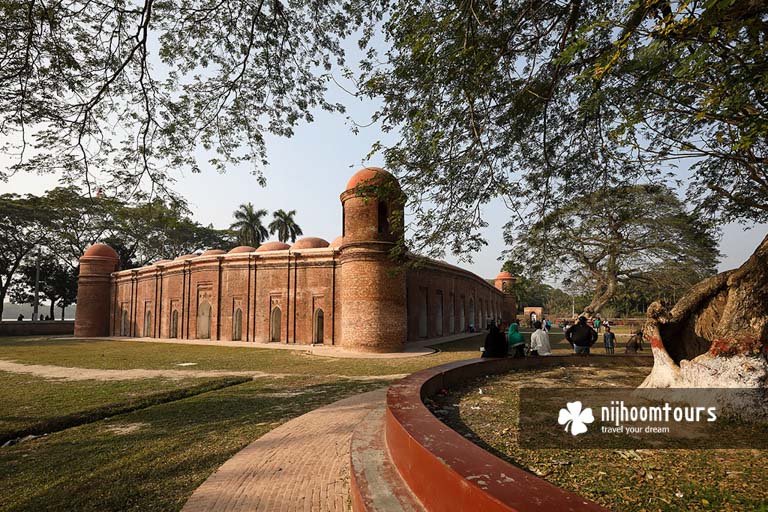 Among the many surviving monuments of the Khan Jahan style in Bagerhat and undoubtedly the most magnificent and largest brick mosque in Bangladesh, is the Sixty Dome Mosque. In reality, the mosque is roofed over with 77 small domes including seven chau-chala Bengali domes in the central row. The construction of the mosque was started in 1442 and was completed in 1459. It is a UNESCO World Heritage Site, and has been described as “the most impressive Muslim monument in the whole of the Indian subcontinent.”

The sanctuary is divided by a forest of slender stone columns, into seven longitudinal aisles and eleven deep bays from which rows of endless arches spring to support the domes. The slightly battered 6′ thick walls and the almost detached circular corner turrets, each capped by small rounded cupolas, resemble the bastions of a fortress. Sixty Dome Mosque in Bagerhat is number four on our list of the best historical mosques in Bangladesh. The highly ornate brick-and-stone mosque is another fine specimen of the Sultanate period. Its square prayer hall, fronted by a corridor on the east, has six octagonal corner turrets and generally conforms to the prevailing style of its period. Its cornice is gracefully curved and the western wall, with its three mihrabs, is profusely relieved with terracotta ornaments.

The single, tall, bulbous dome, which is supported on squinch arches, covers the prayer chamber, whilst the corridor is spanned by a further three small domes. Similar to Chhota Sona Masjid at Gaur, the walls, are faced with beautifully carved stonework. Sura Masjid in Rajshahi is number five on our list of the best historical mosques in Bangladesh. 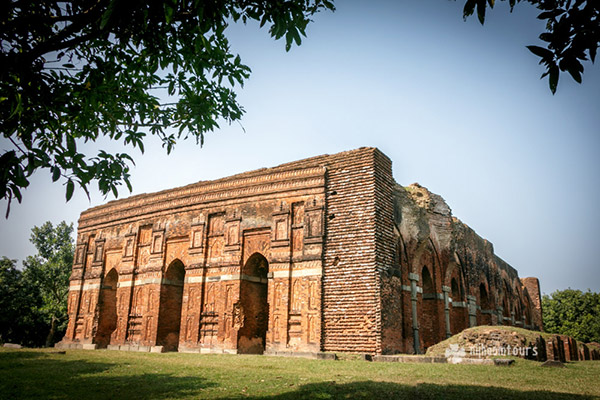 Darasbari Mosque is a fine example of the mature architecture of the Ilyas Shahi period. It was probably built in 1470 by Sultan Yusuf Shah. The prayer hall, entered through the seven arched entrances of the verandah, must at one time have been roofed over with a series of domes, including a set of chau-chala or Bengali domes in the central row, but all of these have now collapsed.

In the north-west corner, there was probably a raised gallery, which was accessible up a flight of steps from outside. The interior western wall of the prayer hall is relieved with nine mihrabs which depict some superb terracotta ornamentation of various floral and geometric patterns in bold relief. Darasbari Masjid in Rajshahi is number six on our list of the best historical mosques in Bangladesh. 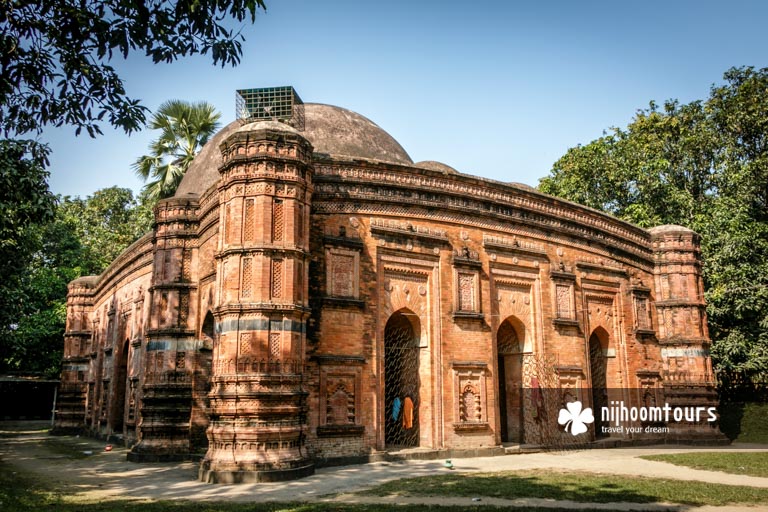 This single-domed square mosque has an attached verandah roofed with three smaller squat domes. Its wall surface is richly embellished with terracotta floral designs and it is also sparsely relieved with stone carvings. The dome of the sanctuary is carried on a number of black basalt pillars. Three highly ornate black stone mihrabs decorate the western wall of the prayer chamber.

Architecturally it may be dated to the 15th century and an Arabic inscription with Quranic verses is still on site. The identity of Rajbibi is not clear, but it seems that she was an influential lady of the royal harem. Khaniadighi Mosque in Rajshahi is number seven on our list of the best historical mosques in Bangladesh. 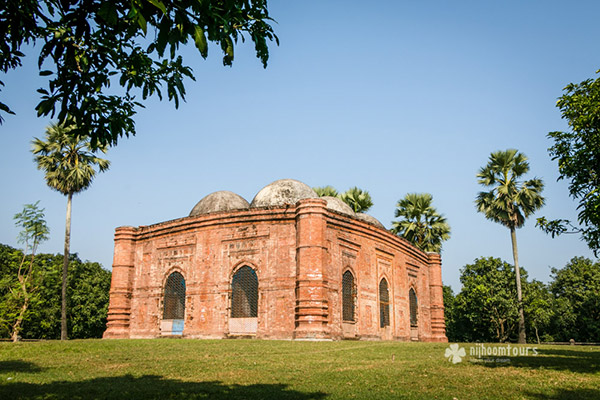 This mosque, with a rectangular sanctuary, stylistically dates to the later Ilyas Shahi period and covered by a single dome. There are three richly ornamented mihrabs on the western wall the central one being the largest. The spandrels over the cusped arches are beautifully decorated with terracotta tree motifs, intertwining prominent terracotta rosettes within its branches. The rectangular frames enclosing each mihrab are boldly relieved with creeper motifs and bands of moldings. Dhunichak Mosque in Rajshahi is number eight on our list of the best historical mosques in Bangladesh. 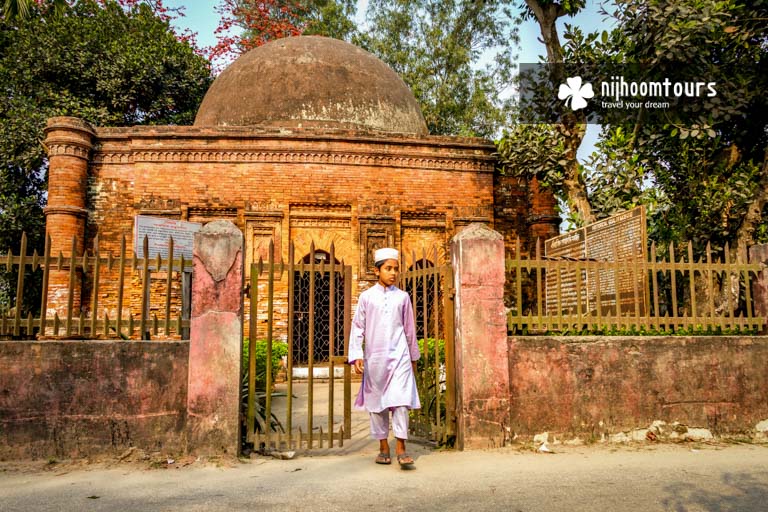 Another single-domed mosque of the Sultanate period is the mosque at Goaldi, which is situated half-a-mile north-east of the Panam Nagar. It was built by Hizabar Akbar Khan during the reign of Sultan Hussain Shah, in 1519. It is a graceful little mosque measuring 16′-0″ square with three richly carved mihrabs.

Of the three mihrabs, the central one is beautifully embellished with carved floral and arabesque relief on black stone, while the side ones are decorated similarly but in brick and fine terracotta work. Inside, stone columns support the dome. Goaldi Mosque in Sonargaon is number nine on our list of the best historical mosques in Bangladesh. Chunakhola Mosque is picturesquely located on an isolated low mound amidst an expanse of flat cultivated fields. In plan and elevation, this single domed small monument closely resembles the Singair Mosque and has similarly suffered heavily at the hands of the inclement weather of this area. Chunakhola Mosque is number ten on our list of the best historical mosques in Bangladesh.

Have you visited these historic mosques in Bangladesh? How fascinating have you found them? Which one is your favorite mosque on this list and why? Have I missed something here? Share your thoughts and experience with us in the comments.