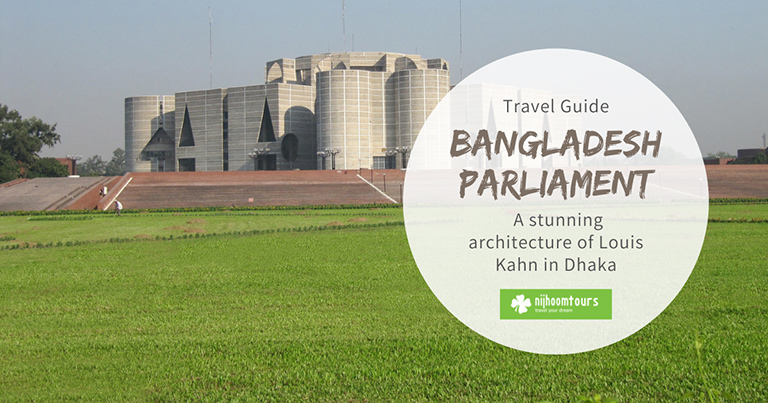 Jatiyo Sangsad Bhaban (the Bengali name for the building), or Bangladesh National Parliament is one of the must-sees of Bangladesh, an architectural masterpiece and a real accomplishment for the country. It was designed by world-renowned American architect and Yale University Professor Louis I. Kahn.

Originally commissioned by the Pakistanis when Bangladesh was known as East Pakistan after the Partition of the Indian Sub-Continent, was meant to serve as the second seat of the national parliament. Construction of the Bangladesh National Parliament started in 1964 but halted due to the Bangladeshi War of independence, and was finally completed in 1982.

If you are coming to Dhaka, watch the documentary “My Architect” about the son of Louis Kahn discovering his father through this work. The Bangladesh National Parliament at Sher-e-Bangla Nagar was his crowning achievement. It will enrich your experience immensely because you will come with a much more full understanding of Louis Kahn, his eccentric life, and his many other buildings around the rest of the world.

Louis Kahn was a pioneer of combining the old and new, of creating bold shapes and views – famous circular windows and doors, and often, when you look to the sky, he’s created shapes in the buildings through which light pours through in a magnificent fashion. 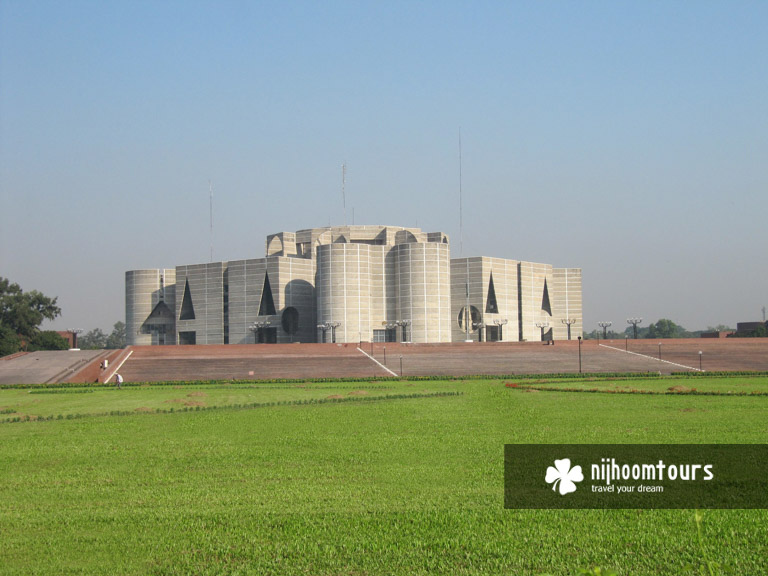 The physical and architectural design of the building gives off a strong Modernist vibe. The interiors apparently resemble a modern-day cathedral intersected with pure geometrical elements. Geometrical windows allow natural light in the form of circles, triangles, and rectangles, it’s very strong and simplistic.

The use of concrete and its very visible role as the dominant building material is by no way an accident, indeed it was very deliberate and apparently typical of Kahn’s work rather than seeing it as a half-completed building like the Lalbagh Fort. Utilizing light and space to create a ‘poetic entity’ are the architect’s own words which formed the basis of his many works and building philosophy.

On the North of the complex, across Lake Road, has a beautiful small artificial lake called Crescent Lake, and there is a monument of late president Ziaur Rahman. The two complexes together form a major attraction for tourists in Dhaka.

The complexes are popular among joggers and skaters of Dhaka. The official Prime Minister’s Residence is on the North-West corner of the Mirpur Road and Lake Road crossing and is a five-minute walk from the Bangladesh National Parliament. The area is one of the higher security zones of Dhaka.

This building is bounded by four major streets. The Complex can be accessed using any of the four roads surrounding it, however, Manik Mia Avenue and Lake Road are the easiest approaches. Lake Road is more scenic than Manik Mia Avenue in the south.

Although not a relic of the historical age, it is considered a masterpiece of modern architecture. This makes it a great tourist site to visit when in Dhaka. But sad to say, this superb piece of architectural work is often found unseen and overlooked.

Have you ever visited the Parliament Building of Bangladesh? How amazing have you found it? Please share your experience here with us in the comments!