Dhakeshwari Temple: The center of Hindu religion and festival in Old Dhaka 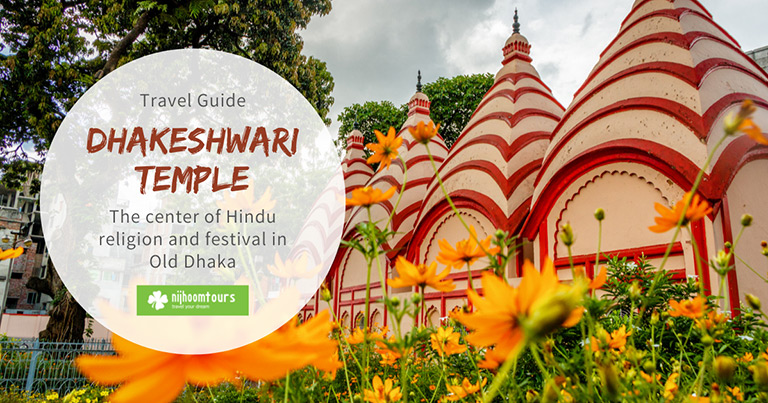 Dhakeshwari Temple is Dhaka city’s main Hindu temple and the national temple of Bangladesh. It is located in Old Dhaka, about 1 km north of Lalbagh Fort, up to a short alley off Dhakeshwari road. This temple is significant to the Hindu religion. It is a part of the famous Shakti Peethas in the Indian Subcontinent, where the gem of the goddess Sati’s crown is believed to have fallen.

Dhakeshwari Temple is the largest Hindu temple in Bangladesh. The word ‘Dhakeshwari’ means the goddess of Dhaka. It is a hub of socio-cultural as well as religious activity of the Hindu community of Dhaka. All the Hindu festivals in Dhaka begin here. You’ll always find devotees coming here in colorful dresses in a festive mood. Dhakeshwari Temple is a must visiting attraction for anyone visiting Bangladesh. Popular legend connects the name of one king, Ballalsena, as its builder, but it is not certain that he is identical with the 12th century Sena king of that name. The style of architecture of the temple cannot be assigned to that period. Furthermore, sand and lime, the mortar used in the building, came to be used in Bengal after the Mughal conquest.

On the other hand, the temple’s architectural and structural features indicate its builder to be someone who had very little influence on the culture of Bengal. Many of the features suggest a similarity to Arakanese religion and religious practices. The existence of twin deities suggests the affinity with the Tantric Buddhism of the Maghs.

It is assumed that the deity belonged to the Maghs and the architectural features indicate its affinity to Arakanese structures. From all these, it has been suggested that the builder of this temple was one Mangat Ray, who was also known as Ballalasena, younger brother of Arakanese king Shri Sudharma, son of famous Arakanese king Raja Malhana alias Husen Shah. 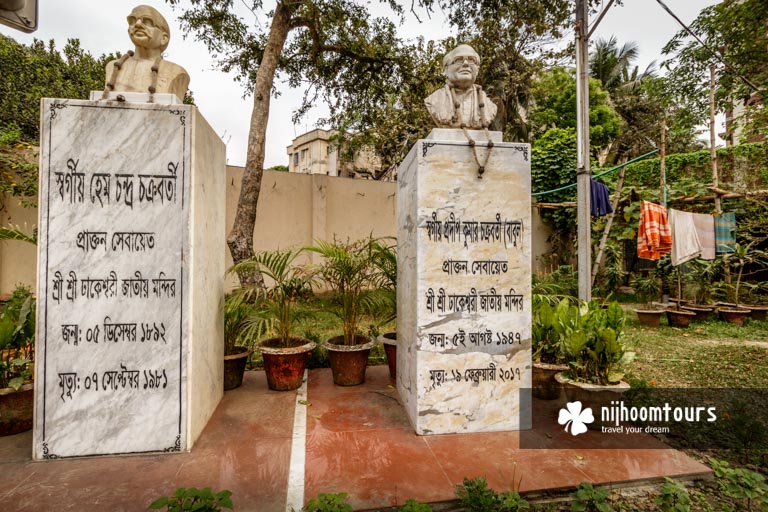 Mangat Ray, who was the governor of Chittagong when it was a part of the Arakan kingdom, rebelled against the king of Arakan in 1638. After an unsuccessful attempt to raid Arakan he fled to Bengal for safety along with his family and supporters with 14 elephants and nearly 9000 men. He was welcomed and provided for by the Mughal Subahdar (governor) of Dacca (Dhaka). Thus it can be assumed that Mangat Ray built Dhakeshwari Temple around that period.

For ages, the temple has been held in great importance. The original statue was destroyed during the 1971 War of Independence by the invading Pakistani army. The temple complex has undergone repairs, renovation, and rebuilding in its long years of existence, and its present condition does not clearly show any of its original architectural characteristics. 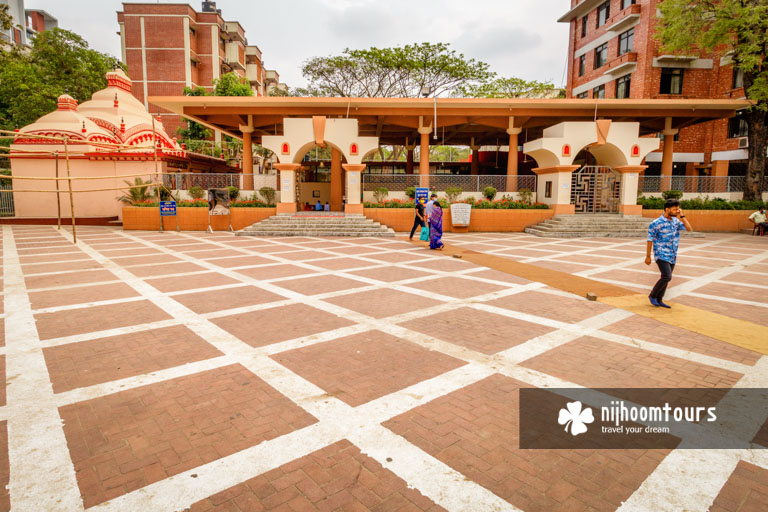 Dhakeshwari Temple is a complex of different temples and other supporting buildings. It has an inner court on the east and an outer court on the west. There is a large water tank on the western side with a walking-path all around, which always remains closed.

There are four small temples of the same size and shape on the tank’s northeastern corner, which stand one after another from east to west. Each of them is built on a high plinth and approached by a flight of steps, and has a Shiva linga inside. This is the most photographed part of the temple. 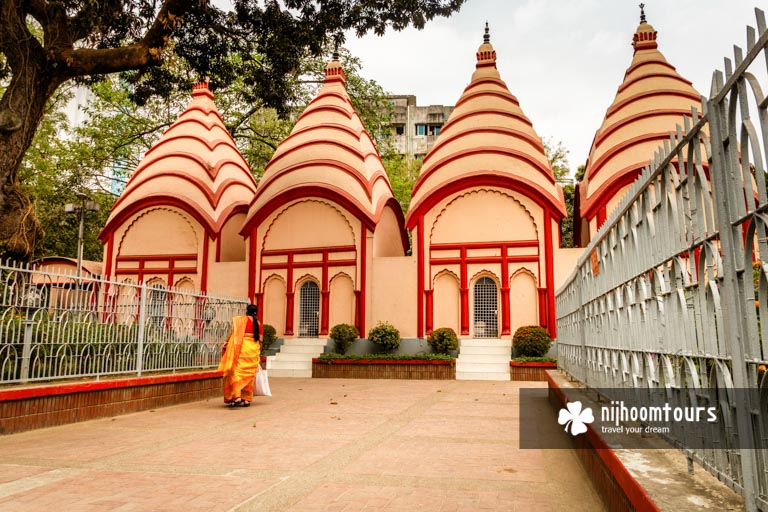 To the north-eastern side of the inner court stands the main temple facing south. It is a three-roomed structure with a veranda in front of having beautiful wooden doors with the curving of different motifs, both sculptural and floral. The main temple’s three rooms are crowned with a domical-sikhara roof; the sikhara over the central room is much higher and bigger than the flanking ones.

In front of it is the Nat Mondir (temple), an open space where different religious rituals are organized, and visitors sit. The temple is open every day, and people from all religions can enter inside. On the east side of the outer court located the newly built Durga Temple, which is an open stage on which are kept the Durga and other deities. This temple is for the Durga Puja, which is the largest Hindu festival. 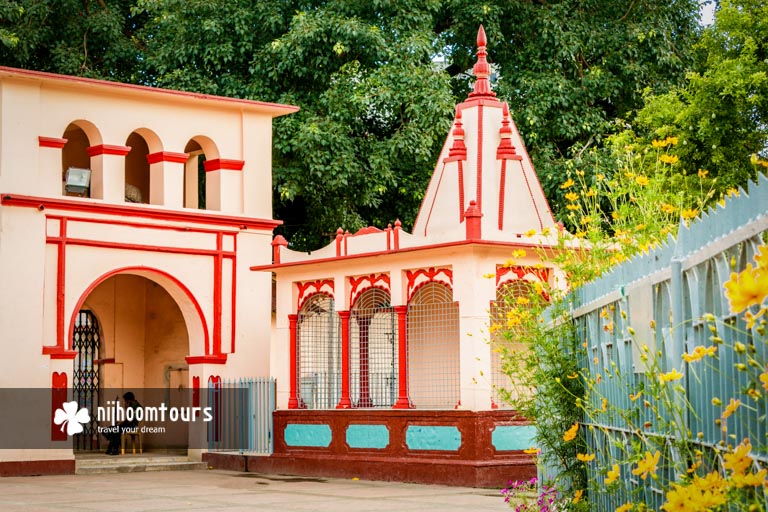 There are no entry fees for anyone to enter any parts of Dhakeshwari Temple. 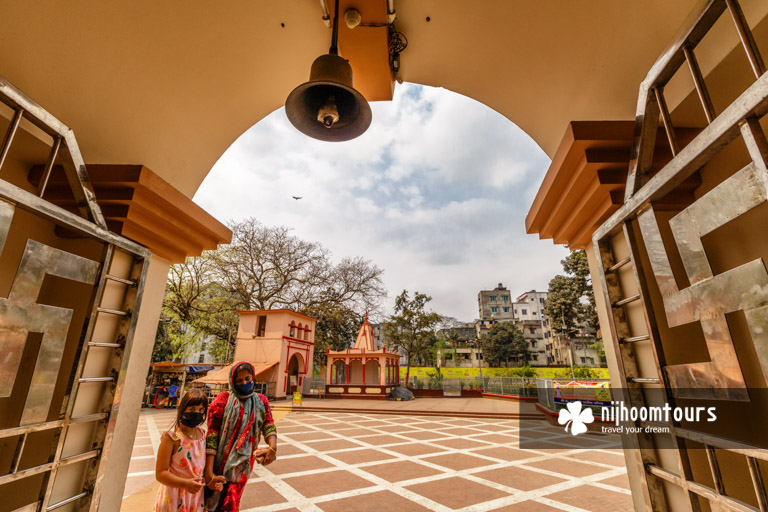 Have you ever visited Dhakeshwari Temple? How beautiful have you found it? Please share your experience with us in the comments.

Check out our Old Dhaka Tour to visit the key attractions of New and Old Dhaka, including Dhakeshwari Temple. The full-day tour starts from $70* US with an air-conditioned car, English-speaking guide, all entrance tickets, lunch at a local restaurant with authentic Bangladeshi food, a rickshaw, and a boat ride.