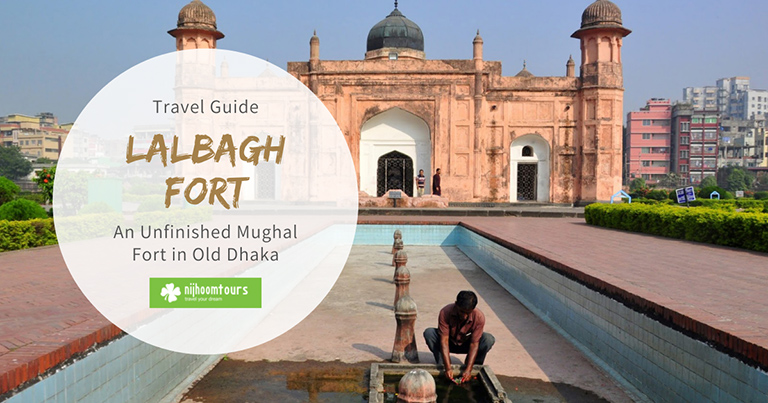 Photo, location, history, opening time, ticket price, off day, Quilla Mosque, and many other details of visiting Lalbagh Fort, an unfinished Mughal fort at Old Dhaka in Bangladesh, and a key tourist attraction of Dhaka City.

Lalbagh Fort is one of the key tourist attractions of Dhaka City in Bangladesh. This is an unfinished Mughal fort from the 17th century, the construction of which was started by a Mughal prince who was the governor of Dhaka at that time. But when he left, the construction was not finished by the next governor in charge because of a family tragedy. Nevertheless, the fort’s massive size and the structures inside bring many local tourists to the fort every day.

Located in the Lalbagh area in Old Dhaka and hence achieving its name, it is the most popular and renowned fort and a great art signature by the Mughal Empire in Bangladesh. It is also known as Fort Aurangabad. It is situated by the bank of the river Buriganga in rich red soil. For anyone visiting Bangladesh, Lalbagh Fort is one of the must-visiting attractions.

Lalbagh Fort is located in the old town of Dhaka, the capital city of Bangladesh. Old Dhaka is the part of Dhaka where the city was originally founded by the Mughals in the 17th-century as the capital of eastern Bengal. The fort is located in Dhaka beside the river Buriganga, which flows a little further in the present days.

The Construction of Lalbagh Fort

Lalbagh Fort is an incomplete structure by a Mughal prince, and later emperor himself named Muhammad Azam (the third son of Aurangazeb). He started the work of the fort in 1678 during his vice-royalty in Bengal. He stayed in Bengal for 15 months. It remained incomplete when he was called by his father Aurangazeb to the capital, Delhi.

Shaista Khan was the new Subedar (Governor) of Dhaka after Muhammad Azam, and he did not complete the fort. In 1684, the daughter of Shaista Khan named Iran Dukht (Pari Bibi) died there. After her death, he started to think of the fort as ominous and left the structure incomplete. Among the three major sections of the Fort, one is the tomb of Pari Bibi. 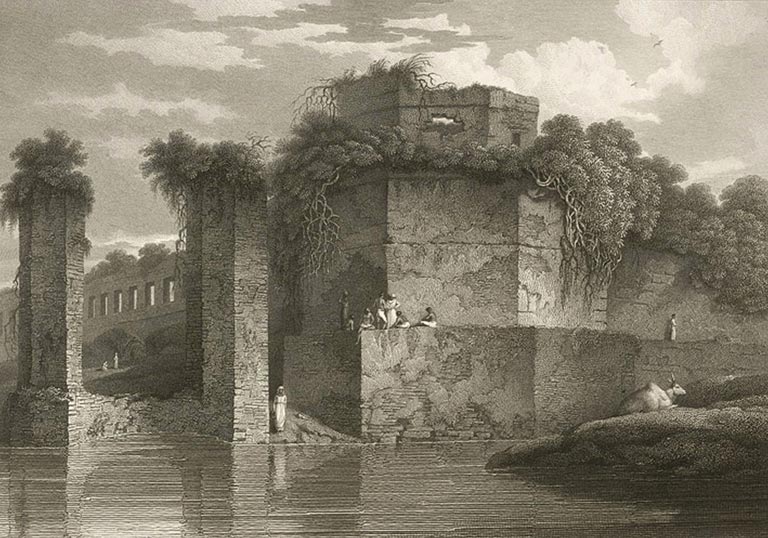 A painting of the abandoned fort in 1814 by Charles D'Oyly. © Photo Credit: Wikipedia

The Decline of Lalbagh Fort

After Shaista Khan left Dhaka, the fort lost its popularity. The main cause was that the capital was shifted from Dhaka to Murshidabad. After the end of the royal Mughal period, the fort became abandoned. In 1844, the area achieved its name as Lalbagh replacing Aurangabad, so the fort as Lalbagh Fort.

After a certain time, Mughal emperor Aurangazeb donated the fort to Shaista khan in memory of his daughter Pari Bibi. The successor of Shaista khan got revenue after his death by leasing the fort to the government. After 1853, the cantonment was replaced in Lalbagh Fort from Purana Paltan.

Currently, the Archaeological department of Bangladesh is maintaining this Historical place. This has become a key tourist attraction in Dhaka. About three million people visit Lalbagh Fort every year, mostly local tourists. The tomb of Pari Bibi inside the fort. © Photo Credit: Gan Hui Hoon

The Tomb of Pari Bibi

Of the Mughal buildings inside the fort, Bibi Pari’s Mausoleum is the most important, as it is a unique structure. It is the only building where black basalt from Rajmahal Hills, white marble from Rajputana, and encaustic tiles of various colors, have been used to decorate its interior.

The 66′-0″ square monument stands in the center of a raised, stone-flagged platform. It has four graceful octagonal turrets at each corner, capped by plastered kiosks with ribbed cupolas. The roof is covered by a false copped dome and crowned by a tall finial.

The interior of the mausoleum is divided into nine chambers, including the 19′-0″ square central sepulcher. This chamber is entirely veneered in white marble, and there is a stepped cenotaph in its center.

Of the other eight chambers, the corner rooms’ dados were originally decorated with glazed tiles of various colors, but these have now been covered with plaster. The remaining rooms are still paneled with marble. Curiously, all the nine chambers’ roofs are spanned by overlapping courses of massive black basalt slabs on the corbel’s principle.

Access to the tomb chamber is from the south, through an entrance filled with a stone door jamb and a door of sandalwood decorated with a Chinese cross pattern. Fretted marble screens block opening on the other three sides. The floor of the tomb chamber is attractively laid out in geometric patterns of marble and black stone.

In layout, the tomb of Pari Bibi resembles the more ambitious tomb of Humayun in Delhi. 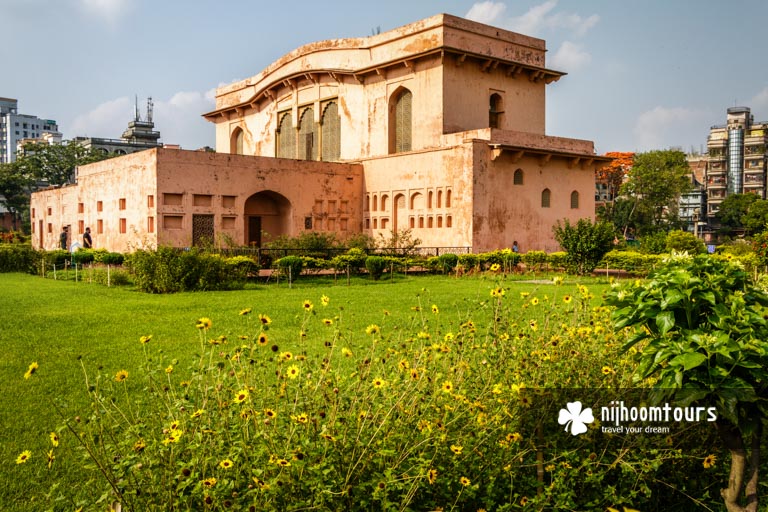 The governor’s residence in the fort. © Photo Credit: Raw Hasan

The second structure in the fort is the governor Shaista Khan’s residence, a two-storied building with a projecting annex to the West containing the Audience Hall and the Hammam. The central hall contains a sunken ornamental fountain in the middle.

The Hammam is covered by a dome that originally had an opening in it for light and ventilation. There is a masonry tank with steps leading into it, which contained temperate water for bathing. Except for the two end rooms, which contain the stairs, the upper floor corresponds exactly with the ground floor. 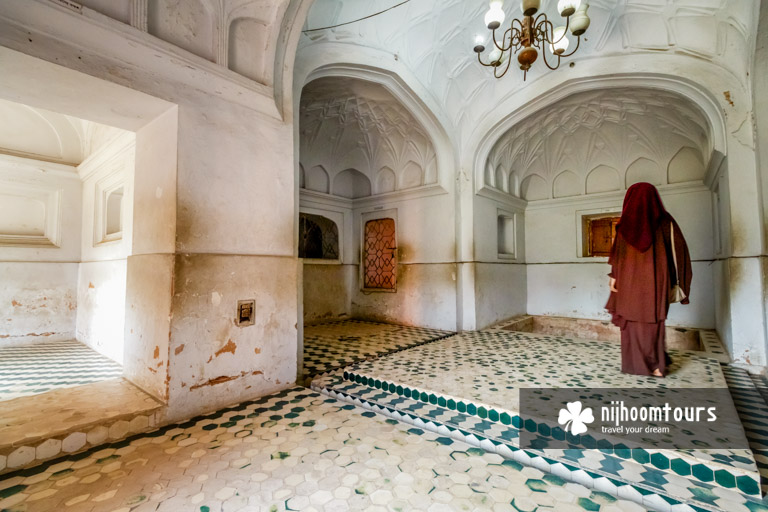 The hammam inside the governor's residence. © Photo Credit: Raw Hasan

This building currently holds a small museum, displaying some Mughal and British period artifacts. No separate ticket is required to visit the museum, but the fort’s entrance ticket needs to present for entering the museum. The upper floor is currently closed because of the weak condition of the building. 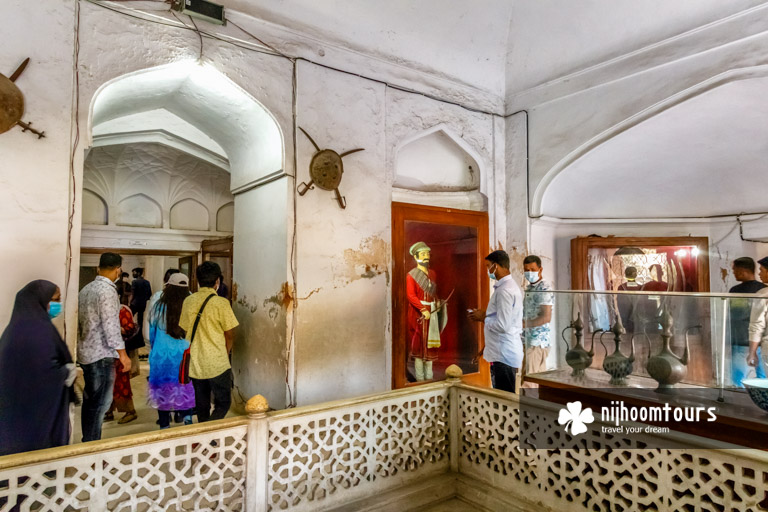 The museum inside the governor's residence. © Photo Credit: Raw Hasan 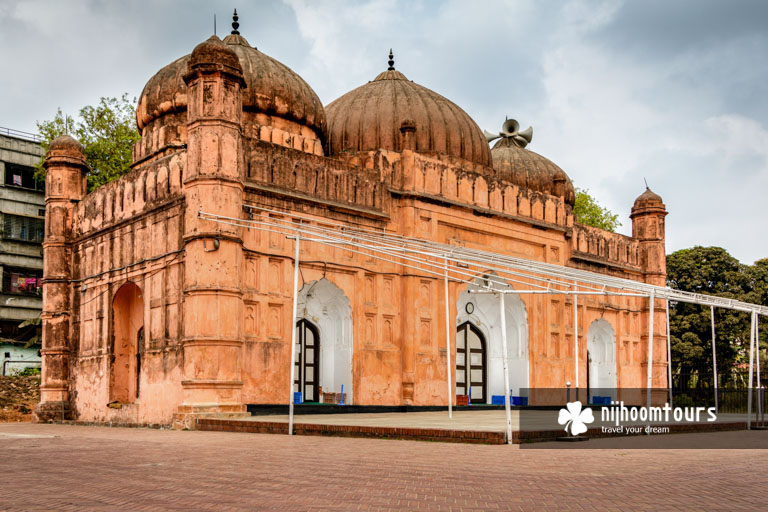 The Lalbagh Fort Mosque (Quilla Masjid) is situated in the western part of the complex, aligned with the tomb of Bibi Pari. It is a typical Bengali Mughal-type mosque – a rectangular structure crowned with three domes. It is one of the finest examples of its kind, where the central dome is larger.

Lalbagh Fort Mosque (Quilla Masjid) was restored and repaired by the Department of Archaeology, Bangladesh, and is now a protected monument. The mosque is still in use and separated with a fence from the fort to enter it for prayer without any ticket. 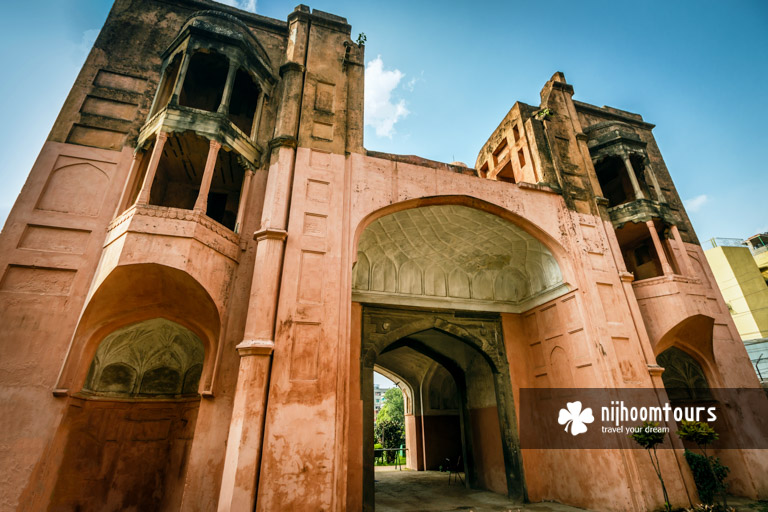 The South Gate of Lalbagh Fort

The main entrance of Lalbagh Fort, located on the southeast corner of the fort and facing the river, presents a grand appearance and rises gracefully in three stories. A lofty archway opens from the riverside into a domed square hall, flanked on either side by slender octagonal minerates with two stages oriel windows. A cupola tops each.

The four corners have pillared kiosks gracefully breaking the skyline. The gateway hall entrance is flanked on either side, with guardrooms and staircases leading to the upper story. 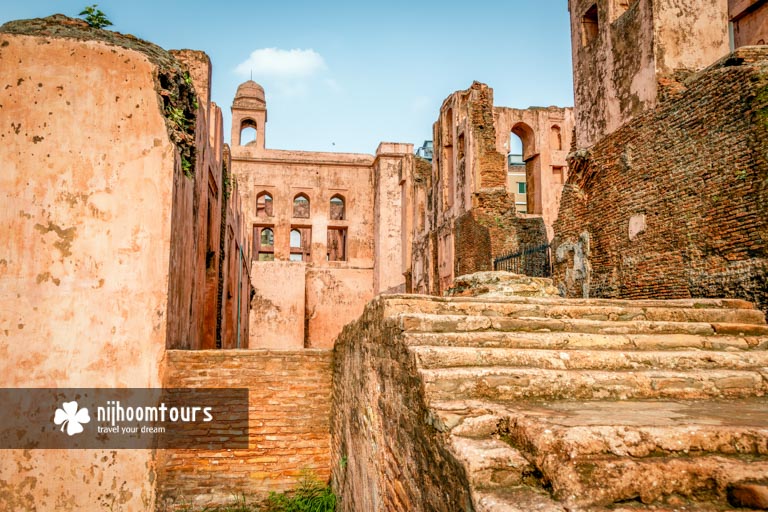 The southern and western fortification walls, which rise to a height of about 25′-0″ from the surrounding ground level, have several octagonal bastions, which are largely back-filled with earth, up to rampart level, have underground cells beneath.

This entrance is currently closed since the river has been shifted further south. There is a base of the fort security just outside this entrance now. Another entrance on the north-western side is used as the main of the fort nowadays. 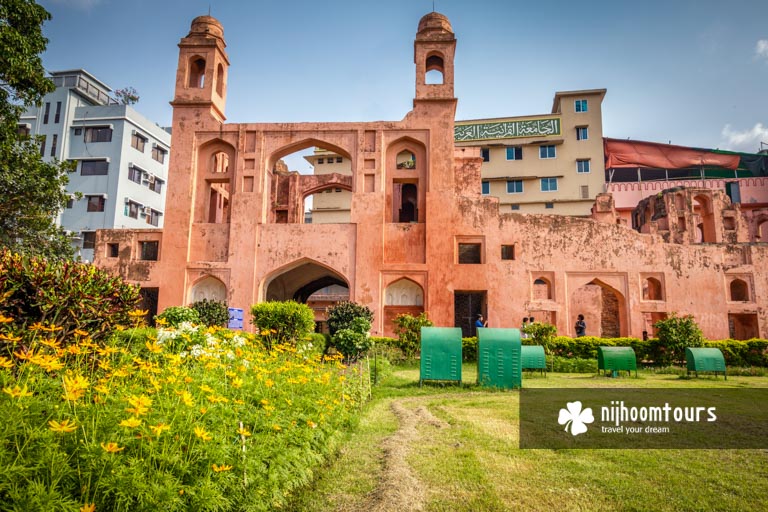 An inside view of the main entrance. © Photo Credit: Raw Hasan 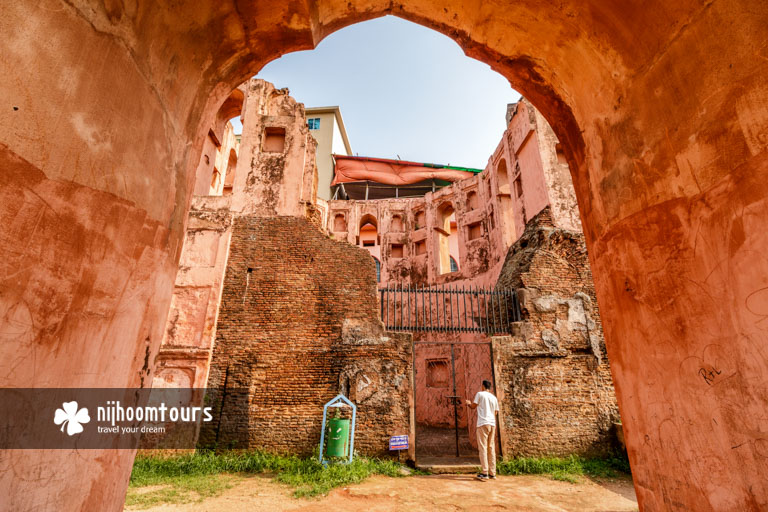 A man looking at a secret tunnel in the fort. © Photo Credit: Raw Hasan

There are several secret tunnels in Lalbagh Fort, two of which used to reach the now ruined Zinzira Fort of the Mughals located on the other side of river Buriganga. Other secret tunnels were built as mazes so that attackers and intruders of the fort lost their way on them and starved to death.

During the colonial period, many mutant soldiers of the Sipahi Revolution and many British soldiers chasing them died in Lalbagh Fort secret tunnels. These secret tunnels have been sealed permanently afterward. 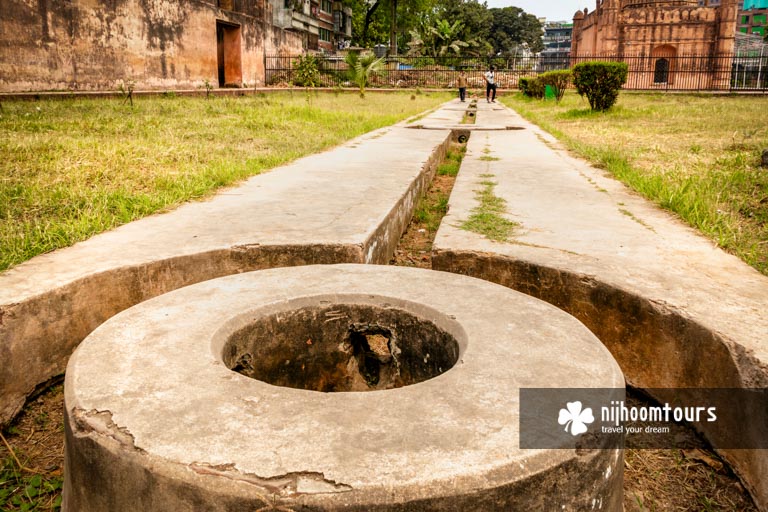 A recent excavation has revealed the fort’s original two layers Mughal drainage system in the southwest corner. The small top layer will bring the water to the big layer underneath through the circular utility holes and carry the water to the south.

The opening time of Lalbagh Fort changes twice every year in summer and winter. It opens and closes one hour early during winter. Lalbagh Fort off day, however, remains the same throughout the year. 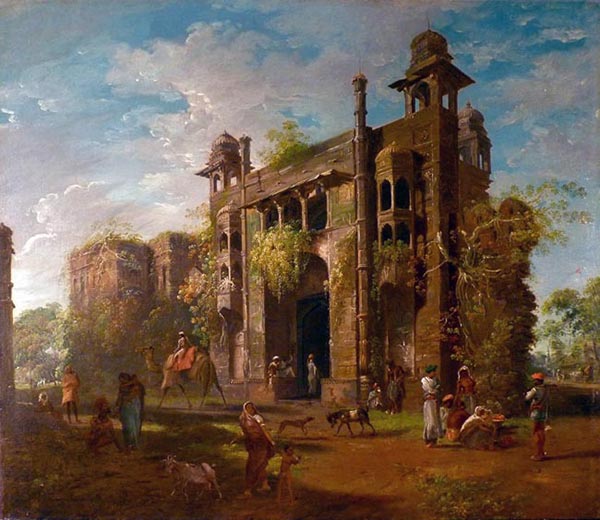 Painting of the South Gate of Lalbagh Fort from 1787

Have you ever visited Lalbagh Fort? How amazing have you found it? Please share your experience with us in the comment!

The full-day tour starts from $70 US per person, including an air-conditioned car, English-speaking guide, all entrance tickets, a rickshaw ride on Old Dhaka’s backstreets, a boat ride on river Buriganga, lunch on a local restaurant with authentic Bangladeshi food, and many more!