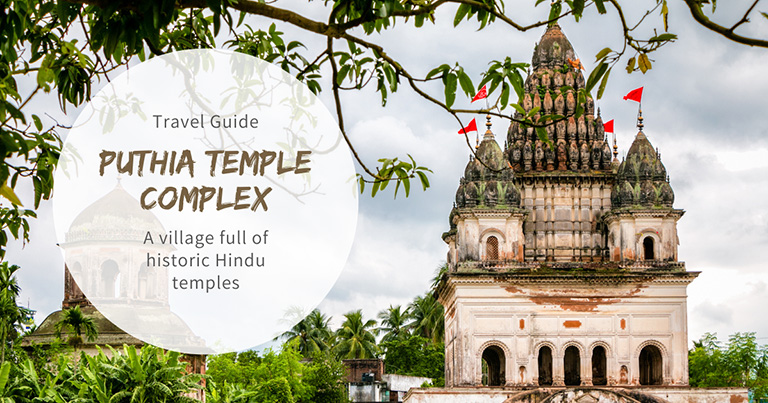 Puthia is a culturally rich sub-district (Upazila) of the Rajshahi District in Bangladesh. The largest number of historically significant Hindu structures in Bangladesh is found in Puthia. Many of these structures are well preserved and Puthia is an interesting area for tourists to explore and gain insight into the history and culture of Bangladesh. In the late 16th century during the Mughal period in the Indian sub-continent, Man Singh, a trusted general of the Mughal emperor Akbar, was sent to Bengal to suppress the rebel Subeders (governors) of this region who were planning a rebellion against the Mughal emperor. Man Singh easily suppressed the revolt by consulting a Hindu Tantrik (holy man) named Bhattacharya.

After his victory, Man Singh requested Bhattacharya to take charge of a large area in Rajshahi state named Laskarpur which he refused. But his young son Pitambar expressed his willingness to accept the offer advised by his mother. So he was appointed as landlord of Laskarpur, made Puthia his capital, and became the founder of the Puthia royal family. 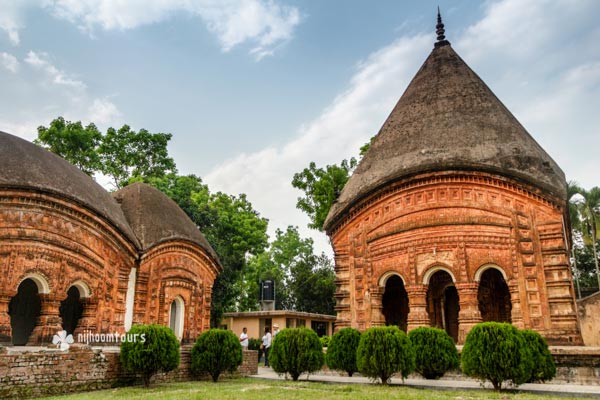 Pitambar built canals surrounding his capital to secure it, dug a big pond in front of his palace, and made this place suitable as a capital. After his death without any children, his younger brother Nilambar inherited the property and became Jamindar (feudal land-owner). He received the title “Raja” (king) from Mughal emperor Jahangir and became the first king of the Puthia Royal family.

Puthia Royal Family estate was the second-largest estate and the wealthiest in British Bengal. Descendants of Nilambar built some great temples and a palace surrounding the big pond in Puthia. Located 23 km to the east of Rajshahi city, Puthia has the largest number of historic temples in Bangladesh. 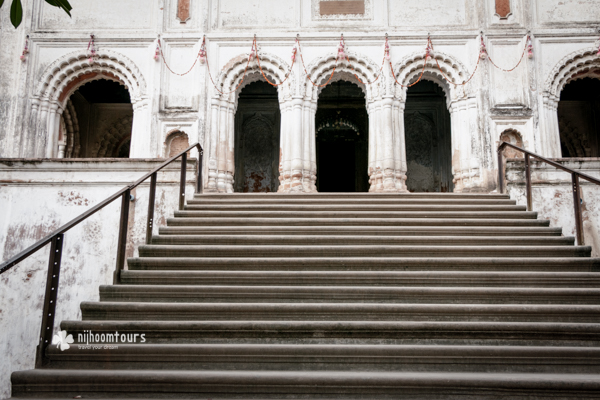 After India’s partition in 1947, Puthia became part of Pakistan. The then Pakistani government abolished the feudal land-ownership system and confiscated all Hindu properties. The Royal Family migrated to India shortly afterward. The Puthia Palace and the entire temple complex are now protected monuments. The Puthia Raj Estate maintained its existence until the termination of the zamindari (Landlord) system by the East Pakistan Estate Acquisition Act of 1950.

The whole area of Puthia Palace is still a place of great wonder and full of histories that can enlighten the thirsty mind of visitors to a great extent. Puthia is one of the must-visiting places in the Rajshahi division for travelers. You can easily spend half of a day here visiting these beautiful structures. There are many structures in Puthia among whom 14 structures are declared protected architecture and maintained by the archaeological department of Bangladesh. Among them, one is a palace, and the remaining 13 are temples.

These impressive temples have been built in terracotta in a variety of styles combining the typical Jor-Bangla architecture with other influences. These terracottas describe the history, culture, religious rituals, war, love and affairs, the daily life of people, and the Hindu deities. Following is a list of the best structures of Puthia worthy of visiting. 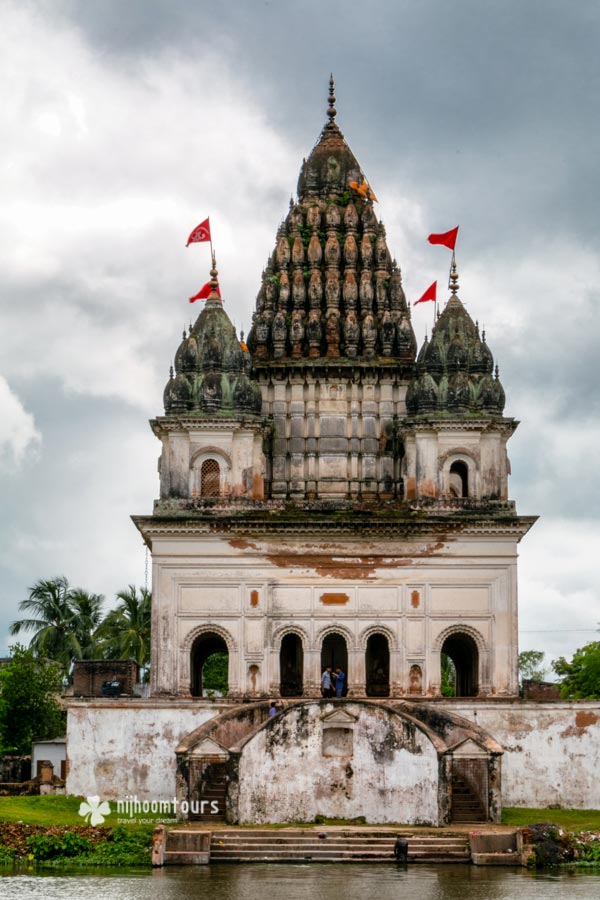 Bhubaneshwar Shiva Temple is the largest Shiva temple in Bangladesh. It was built in 1823-1830 A.D. by Rani Bhubonmoyee Devi, the widow of Raja Jagat Narayan Roy. While entering the Puthia temple complex, this massive temple will be the first to spot overlooking the big pond named Shiv Sagar. This ornate temple is an imposing and excellent example of the five spire style (Pancha Ratna) temple architecture common in northern India.

The temple is 14.30 meters long, square-shaped, and built on a raised platform of 04 meters height. It has wide stairs on the south side of the main entrance. Surrounding it has corridors on four sides with 05 entrance each side. There is one entrance each in east, west, and south side to enter the main sanctuary. 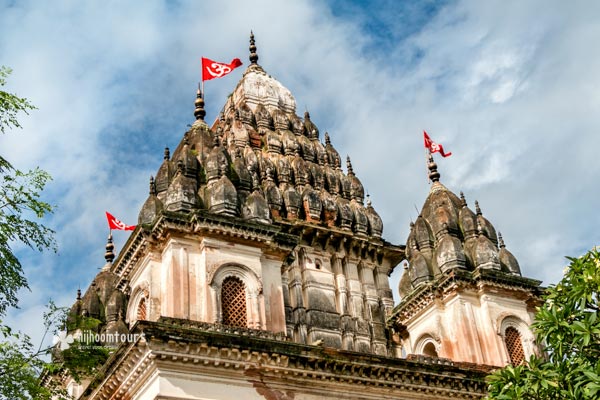 The ornamented tower of the Shiva Temple in Puthia. ©Photo Credit: Raw Hasan

Inside the sanctuary, lies a very large black basalt Shiva Lingam, which is the largest in the country. It is decorated with stone carvings and sculptural works, which were disfigured during the Bangladesh Liberation War in 1971. The invading Pakistani army attempted to displace and break the Shiva Lingam but was unable to move it from its position.

There are separate stairs on the north side of the temple to go to the pond. In the roof of the temple, there are four towers in for corners, and one large tower in the center. The central tower is 20 meters high. This temple is now a protected monument by the archaeological department of Bangladesh. 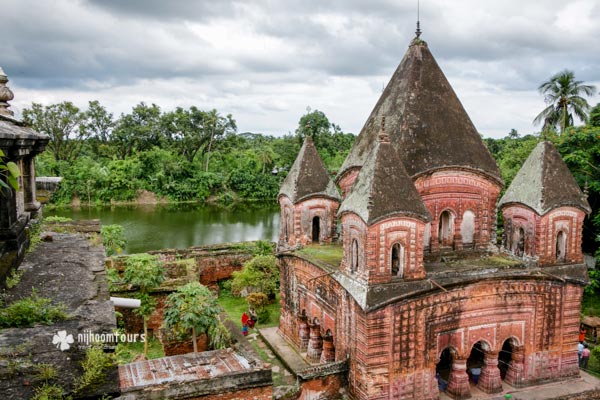 Pancharatna Gobinda Temple is the most significant, located inside the palace, on the left-hand side of the inner courtyard. It was erected between 1823 and 1895 by Prem Narayan Roy, a Jaminder (feudal landowner) from Puthia royal family.

This ornate temple is an imposing and excellent example of the five spire style (Pancha Ratna) temple architecture mixed with typical Jor-Bangla style. The temple is dedicated to Lord Krishna, as the Puthia royal family were converted to Vaishnavism by Radhamohana Thakura. Today the temple has a Krisna deity in the sanctuary for worship. 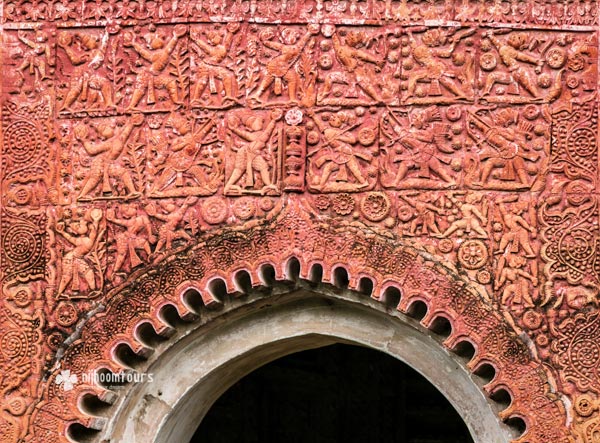 Pancharatna Gobinda Temple is a large, square structure, built on a raised platform. It is 12.25 meters in size on each side. It has one central room which is the sanctuary and four square size small rooms in four corners. There is four entrance on four sides of the sanctuary, but the main entrance is located on the west side.

The Cornish of the temple is a little curved in design. It has four ornate towers in the four corners and a big central tower. Unlike the Kantaji Temple in Dinajpur, it has its towers intact. In 1886 and 1897 A.D. there were two great earthquakes in this area when most of the structures were severely damaged, including the palace of Puthia and not so far the towers of Kantaji temple. But because of the building technique, nothing happened to this temple. The stairs of this temple to go upstairs is located on the south side of the temple beside the entrance. 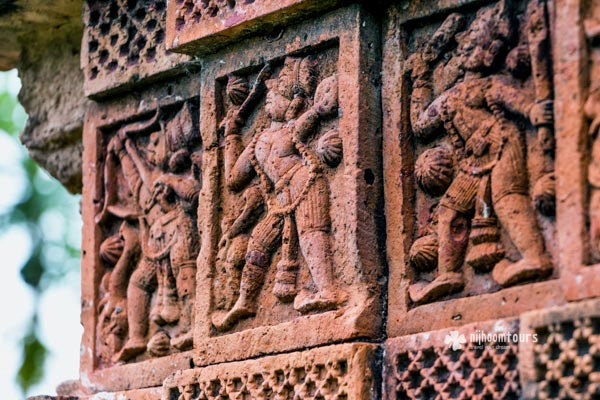 The Pancharatna Gobinda Temple has exquisite terracotta ornamentation depicting the divine romance between Krishna and Radha as told in the Hindu epics. It also has battle scenery from Ramayana and Mahabharata, the epic Hindu books, and scenery of different Hindu deities, the general life of people and culture, and flora and fauna. Dol Purnima, also known as the Holi festival, is a major Hindu festival dedicated to Sri Krishna. Holi celebrations start on the night before Holi with a Holika bonfire where people gather, sing, and dance. The next morning is a free-for-all carnival of colors, where participants play, chase and color each other with dry powder and colored water, with some carrying water guns and colored water-filled balloons for their water fight. The Dol Temple of Puthia is dedicated to this fabulous festival.

The Dol Temple of Puthia is a unique structure, located on the opposite side of the palace. Built in 1778 A.D. by Jamindar Bhubanendra Roy of Puthia royal family, the temple is a four-storied, 20 miters high square-shaped structure. Every upper story has become smaller than the lower one, giving it a pyramidal shape. It has a doomed single spire with a finial top.

The temple has an open balcony on four sides of every story. It is open on all four sides, with a total of 64 entrance combining the all for stories. The view from the top floor can help visualize why the temple is located in the middle of the village. It was perhaps used to display deities of gods and goddesses during festivals. 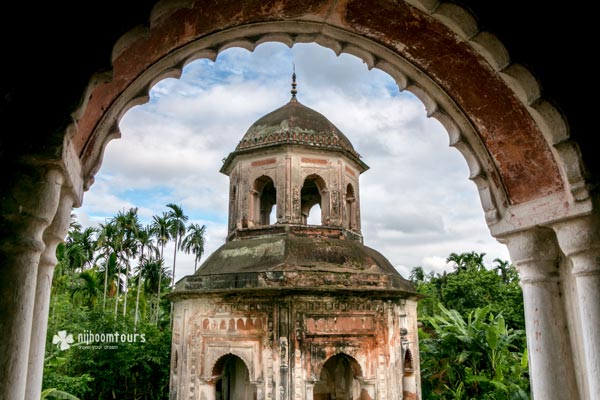 A charming small temple to visit in Puthia is the Jagannath temple, also known as the Roth temple. This Bangla-style miniature temple is situated adjacent to the large Bhubaneshwar Shiva Temple overlooking the big pond named Shiv Sagar. It is built out of brick, resembling the shape of a Bengali bamboo hut, with a single tapering tower.

The Jagannath temple of Puthia measures only 5m (16ft) on each side. The single tapering tower rises to a height of 10m (33ft). Its western facade is adorned with terracotta panels of geometric design. The temple is octagonal in design and has a corridor surrounding it with 8 pillars.

There is two entrance in the north and east side to enter the temple. The entrances have nice decorations on basalt stone frames. This temple is believed to be built by Rani Bhubanmoyi Debi in 1830 AD. It is currently abandoned.

Have you visited the temple village of Puthia in Bangladesh? How fascinating have you found it? Which one is your favorite sight in Puthia and why? Have I missed something here? Share your thoughts and experience with us in the comments.